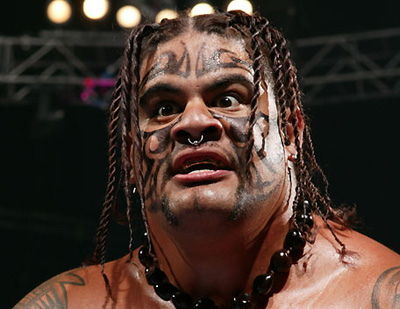 On Monday June 8th 2009 WWE came to the agreements of the release of Umaga (Eddie Fatu)I was shocked when I heard the news, I thought maybe he asked for his release however, I later on found out that he violated the WWE wellness policy. WWE offered Fatu free rehabilitation but refused to seek it therefore resulting in his contract being terminated. That was a big mistake by Fatu who was getting main event slots in his WWE career. His last match was against CM punk in a Samoan strap match at the Extreme Rules Pay-Per View, which Fatu lost.

Fatu was also known as Jamal in that tag team 3 minute warning along side his partner, Rosey who then switched character to Super Hero In Training (S.H.I.T) who was also released a few years ago. On Monday April 3rd 2006 Fatu made his debut as Umaga Destroying Ric Flair. Later on in his career Umaga feuded with Kane in their last match Umaga defeated The Big Red Monster in a loser leaves raw match.

Umaga's first Wrestlemania was against Bobby Lashey in a hair match, in which if Umaga lost Vince had to shave his head bald and if Lashley lost Donald Trump had to shave his head bald. Of course Lashley won and Vince was bald. Fatu is a former United States and intercontinental champion. Fatu has many options open he can change his ways by attending rehabilitation and negotiate with WWE for a new contract. Fatu can also go to TNA were the wellness policy's are not very strict if so there is already rumors of a feud with Samoa Joe.

Article by Wes
Posted by WWEGossip at 9:22 PM